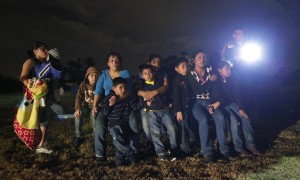 The media has fed us albums of anti-immigration protesters taunting buses of undocumented immigrants arriving from Texas to the processing center in Murietta, California. Even an entire album does not disguise that only a handful of people got up off their ugly asses to go & jeer racist chants at desperately poor human beings who just traveled nearly 3,000 miles to earn their daily bread. We only wish the media would be so documentarian when it came to reporting the massive & frequent immigration rights protests across this country.

This is a photo of immigrants from Honduras & El Salvador who crossed the border just outside McAllen, Texas & were caught by US Border Patrol agents. The media caption to the photo said this area is the epicenter of the current immigration tsunami from Central America & said the area “has become a hot spot for migrants, human smugglers & drug cartels.” Nice touch that! Trying to insinuate undocumented immigrants into drug trafficking–when US banks & government agencies have that trafficking all sewed up already.

These young women & children are among those being bused to Murietta, CA & the people being jeered by a handful of racist slugs. In contrast, hundreds of people in the McAllen area are volunteering & providing assistance to immigrants (released from immigration jail) with food, showers, clothing, & moral support as they proceed north to reunion with their families.

Immigration is a human right! Open the borders! Close down the immigration jails!