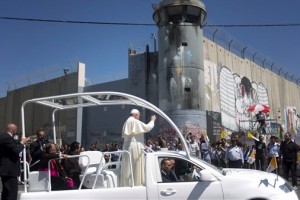 Call me ungrateful, but I think the Pope Francis trip to Palestine & Israel is a mixed bag of symbolic gestures–like visiting Mahmoud Abbas & the West Bank, praying at the apartheid wall, & visiting Al-Aqsa mosque. Like all symbolic gestures, these are not meaningless but what they signify are evasions of Palestinian justice. They’re a political dog & pony show. What matters is that he is promoting a bantustate solution, is not calling for the right of return for Palestinian refugees, & not denouncing the West Bank occupation or siege of Gaza.

So what if he says a prayer at the apartheid wall!? It may rile Israel but it won’t advance Palestinian justice one iota. Pope Francis isn’t a rookie to politics & neither are his Vatican advisers. Millions of people around the world are outraged by Israeli apartheid & ethnic cleansing & the pope can get away with a wimpy-assed prayer & be lauded for it?

Some may call that incremental progress toward justice for Palestinians. Let’s call it what it is: a shameful deference to Zionism & maybe collusion.

Tear down that apartheid wall! No military aid to Israel! Support Palestinian justice by boycotting all Israeli products (barcode beginning 729), & supporting the cultural boycott of Israel.