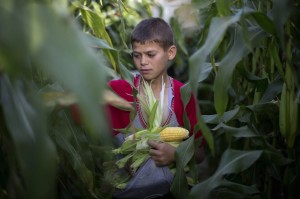 This Palestinian boy in Gaza is helping his father harvest corn to sell at market. The little fellow probably doesn’t know he’s part of a long agricultural history rooted in colonialism & now affected by neoliberal agriculture. Maize was first cultivated about 2,500 BCE by Olmec & Mayans in the Valley of Tehuacán in the present day Mexican state of Puebla, about 150 miles east of Mexico City.

After European colonialism in the late 15th & early 16th centuries, maize was pirated & introduced back to European agriculture; it eventually spread to the rest of the world–including Palestine. Sweet corn is usually grown for human cuisine; field corn varieties for animal feed & chemical feedstocks like ethanol. Now of course, neoliberal agriculture is changing everything. In the US, 40% of the corn crop is produced for corn ethanol & 85% of the corn crop is genetically modified.

US statistics on corn crops might make that Palestinian corn worth its weight in cobs & soon the only corn left that’s edible, even by livestock.