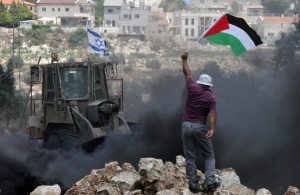 There is no need to genuflect to the contributions Noam Chomsky has made to understanding Zionism. With the collapse of the left, he has long stood alone on the campus circuit educating thousands about the nature of Israel. But for those who came of age politically in the 1960s (& earlier) there were many who elaborated the nature of Zionism even more cogently & without the compromises Chomsky makes to left Zionism. Those teachers include Abraham Leon, the Belgian Jew who died at Auschwitz; activists from Matzpen, the Israeli socialist group (now defunct); & many anti-Zionist Jews & socialists around the world, including Ilan Pappé, the Israeli now resident in England.

Chomsky, despite his criticisms of the violent excesses of Israel, believes in the Zionist project of an only-Jewish state, reflecting a deep conservatism & cynicism in his thinking which makes him unwilling or unable to thoroughly anatomize the reactionary character of Zionism. Because he’s a principled person, this cynicism seems to put him at odds with his own theoretics; it certainly puts him at odds with reality & with Palestinian justice. Because if there was ever an instance where you can’t possibly have it both ways, that would be Israel as a Jewish-only state & Palestinian justice.

Chomsky has chosen just this moment in time–when Israel is bombing the hell out of Gaza, conducting a barbaric jackboot occupation in the West Bank, & inciting racist mobs against Palestinians in Jerusalem–to publish a smarmy attack on the Boycott, Divestment, & Sanctions (BDS) movement in The Nation magazine. Using the legalistic parsing employed by Norman Finkelstein, he attempts to discredit the characterization of Israel as an apartheid state. Both men expose their support for Israel as a Jewish-only state by appealing to the most conservative international agencies like the United Nations & Human Rights Watch–not to mention the US State Department.

Neither has respect for Palestinian intifada & rooted in academia, neither has a clue about how to build a social movement. Chomsky at least has always been candid in admitting that weakness. But most importantly, neither wants BDS & Palestinian solidarity to succeed because it threatens the possibility of a Jewish-only state. In their cynicism, they cannot envision a democratic, secular state where Jews & Palestinians & Africans live in harmony as brothers & sisters. Theoretically, like all Zionist ideologues, they capitulate to racism & antisemitism & the status quo of colonialism.

Both Chomsky & Finkelstein are media celebrities called on frequently for commentary on Israel. In opposing BDS with such arrant contempt they are trying to eliminate the economic boycott, a non-violent political weapon, & leave unarmed Palestinians to the savageries of bombers & jackboots. It may not be politic for Palestinians to sever relations with these two erstwhile allies, but sure as hell Palestinian supporters can call them out for such contemptible, shameful betrayal of justice.

Here a Palestinian responds to Israeli bulldozers expropriating Palestinian lands in the West Bank village of Kufr Qaddum in the spirit of intifada (on June 13th).