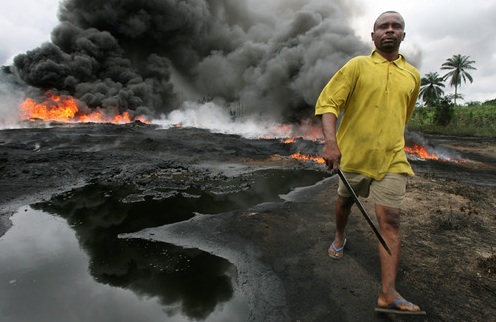 Earth Day in Nigeria 2014: Even the BP oil spill in the Gulf of Mexico (from April to July 2010) pales in comparison to the destruction Shell Petroleum has wrought in the Niger Delta of Nigeria. And not just massive environmental destruction, but neoliberal plunder & political corruption so colossal it is nothing less than a dystopic hell. It requires a revolution. There is no other possible amelioration.

Nigeria is a major oil producer & 80% of government revenues come from oil exports. But after 58 years of oil exploration in Nigeria, the government neither meters nor monitors the volume of oil production by Shell & other oil companies, has no functioning regulatory agencies, & doesn’t have a clue what is produced & loaded on to oil tankers. After greasing the palms of corrupt government officials, the oil companies simply loot thousands of barrels a day. That would explain why Nigeria has to import most of its fuel, ostensibly due to lack of refining facilities. In one of the barbarities of neoliberal plunder, the IMF insisted in 2012, despite massive popular resistance, that the government reduce the fuel subsidy to Nigerians–70% of whom live on $2.00 a day.

Shell has a long history of collaboration with the Nigerian government in employing deadly force & repression against opposition to their presence in the Niger Delta. In a US diplomatic cable released by WikiLeaks, Nigerian politicians & military officials are exposed as the culprits in the of majority of oil thefts. They commandeer & control access to barges & tankers to help oil companies loot. The diplomatic cable reads: “The military wants to remain in the Niger Delta because they profit enormously from money charged for escorting illegally bunkered crude & from money extorted in the name of providing security on the roads.”

Many belief socialism is utopian & only works on paper, but capitalism doesn’t even work on paper. And in real life, it’s becoming a living hell. The immense natural resources of Nigeria which could provide a decent life for all are instead ruthlessly plundered, leaving the population impoverished. Neoliberalism is the barbaric phase of capitalism & exploitation & plunder is the name of its game.

This photo is by noted Nigerian photographer, George Osodi, who comes from the Niger Delta region & has long documented the unspeakable environmental destruction.