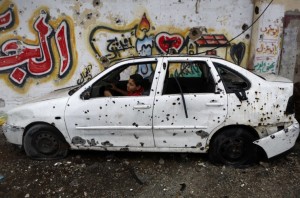 When you think you’ve heard it all in Zionist propaganda, think again. This Palestinian boy is playing inside the carcass of a car shrapneled to death in the residential neighborhood of al-Shejaea of Gaza City. Israeli hasbara claims it warned residents (through automated phone calls, text messages, & leaflets dropped from planes) to evacuate their homes before it bombed them into smithereens. So when Palestinians ran to pick up a leaflet or evacuated their homes were they then shrapneled to death by the same kind of artillery barrage that destroyed this car?

Zionist media & apologists are having a hell of a time trying to clean up the propaganda disaster of hundreds of Palestinian “civilians” & children slaughtered like fish in a barrel. They’re trying first to minimize the numbers killed & claim the death toll is under dispute, as if Palestinians jack up the numbers for sympathy. Well of course, the death toll is under debate; many people are still buried dead & alive in cement rubble & no one yet knows how many have died.

Some media, like the NY Times & BBC, are analyzing death data & the NY Times concludes the most overrepresented in the death toll are men aged 20 to 29, “the population most likely to be militants.” Well that’s okay then!? Apparently being a young man in Gaza makes you an acceptable target for Israeli bombs & shrapnel. The NY Times continues its idiocies: “Human rights groups acknowledge that people killed by Hamas as collaborators & people who died naturally, or perhaps through domestic violence, are most likely counted as well.” Well quite frankly we can understand (even if we completely disbelieve the allegation) that Hamas would shoot someone collaborating with Israeli ethnic cleansing in Gaza. That’s where that “war is hell” thing really fits. We would certainly like the human rights group cited by the NY Times to identify themselves & document such allegations. But are we really expected to believe Palestinian men took time out from dodging Israeli bombs & artillery to beat their wives for not having dinner on the table? Or that a Palestinian who had a heart attack during the bombing just had a ticker than ran out?

Israeli war propaganda made the death of Palestinian children a central theme by targeting children with their bombs & then claiming parents used their beloved kids as human shields–or as Eely-Oily Weasel put it, “child sacrifice.” But there’s fallout to face & Zionist apologists are struggling to cope with the condemnation. So what we’re getting now is the hand-wringing, the angst, what the NY Times calls grappling with the “moral implications” of slaughtering so many Palestinian children. But this kind of moral grappling is only worthy of contempt. Listen to how cleverly this angst is framed: “many Israelis & their supporters abroad, forced to grapple with the moral implications of backing a military campaign against guerrilla fighters embedded in a densely populated area, have embraced the rationale offered by Israel’s government that Islamist militants are guilty of provoking the carnage by launching missiles from residential neighborhoods.” So you see just how deep that grappling goes!? Hamas provoked the slaughter of small children & unarmed men & women. Does that differ from Netan-psycho-yahu who said “Every civilian casualty is a tragedy, a tragedy of Hamas’s own making”?

The NY Times wants us to see the scope of Zionist “radical empathy” (as the liberal Zionist rabbi terms it) by citing Leon Wieseltier, the literary editor of The New Republic who said, “A provocation does not relieve one of accountability for how one responds to it. For this reason, the war has filled me with disquiet, which my sympathetic understanding of Israel’s position has failed to stifle.” Disquiet at ethnic cleansing? Not revulsion? Oh such delicate & refined sensibilities! Disquiet is what you feel when someone farts in public, not what normal people feel when hundreds of people are bombed to death.

Mr Wieseltier goes on: “I have been surprised by the magnitude of the indifference in the Jewish world to the human costs of Israel’s defense against the missiles & the tunnels. Some of the emails I have received have been lunatic in their lack of compassion. According to a poll by the Israel Democracy Institute, 95 percent of Jewish Israelis believe the war in Gaza is just. It is easy to see why: Self-defense is also a moral duty. But only 4 percent believe that the Israeli military has used excessive force. This makes me queasy.” Well good on him for feeling slightly indigested because most of the world have been deeply disturbed–not to mention, horrified–by the sight of Israelis sitting in the hills of Sderot cheering on ethnic cleansing like it was the World Cup.

Israel & it’s media chorus have a quandary on their hands & there is no reason on earth why those who oppose ethnic cleansing should buy this phony hand-wringing & “radical empathy”. Israeli apartheid & ethnic cleansing have been going on for over 66 years & the first time angst appears is when over a million people around the world rose up in opposition.

Flip this stuff the bird & keep marching in solidarity with Palestinian justice & opposition to ethnic cleansing. 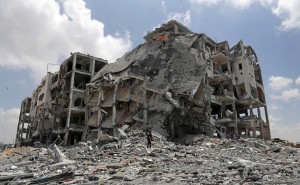 Let’s speak bluntly since diplomacy takes too much time. It’s too tedious to search for polite ways to say ugly truths. If you believe Israeli propaganda justifying ethnic cleansing, you don’t just have rocks in your head or cognitive dissonance or dissociative disorder; you need a guardian to handle your affairs.

The crackpots are now running the show in the hasbara factory. Just a review of the idiocies: Israel used a Patriot missile to shoot down a Hamas drone aircraft headed for Tel Aviv; Hamas was using specially trained skydivers for terrorist attacks in Israel; Hamas was rigging up suicide donkeys; Hamas rockets headed for Israel miraculously reversed course & landed in Gaza; Hamas has rocket launchers & tunnel accesses in homes, schools, hospitals, mosques, marketplaces, even UN-refugee centers. And the pièce de résistance of foolishness? According to Michael Oren, former Israeli ambassador to the US, Palestinians booby-trap toasters & fridges in their houses.

The Exodus baloney only takes you so far, Israel. When people believe Palestinians use their children for human shields, it only shows the depth & power of racism. It exposes that Israel draws on its roots in 19th century colonialism & racism to vilify the colonized as less than human. It links Israel to modern neoliberal colonialism, the barbaric phase of capitalism, where dispossession & plunder have created millions of homeless & forced them to travel the planet looking for a home & where those who resist are shot down like animals.

But when Israel blames Palestinian children for getting killed by getting in the way of a bomb, we haven’t just entered an Onion or Mad Magazine reality. We’ve entered the Twilight Zone; we’re entering the historic moment when the Exodus myth was stripped bare of romance & exposed as colonial racism.

Look at the mountains of cement rubble that now mark Gaza & ask yourself what was Israel’s intent? To take out rocket launchers destroying Israel & menacing it’s population? After nearly four weeks of relentless carnage in Gaza, Israel has yet to produce a single photo documenting property damage in Israel from Hamas rockets. And when we say document, we do not mean a 20-second grainy image of what might just as well be an unrepaired pothole.