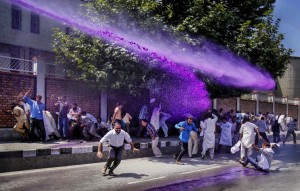 This is episode umpteen of Kashmiri government workers in the city of Srinagar demanding payment of wages in arrears, that all contract employees be made permanent, & to raise the retirement age by two years (India has no social security net). This is a long-standing battle between public service workers, teachers, health workers & the government which has gone unresolved for more than a few years now.

Police attacks on strikers are distinguished by the use of toxic purple chemical dyes in water cannons. Police in Srinigar claim the dye is used for later identification of protesters but they notoriously nail local shopkeepers, onlookers, & other workers in the area as well. Water cannons are dangerous enough by themselves without adding chemicals & cause any number of injuries, including broken bones, eye & skin damage, injured internal organs. Many strikers have been injured & required hospitalization. The chemical dyes add skin rashes & cancer to the list.

Water cannons were used against civil rights protesters in the US & became associated with police brutality. That movement effectively ended their use in the US. Now however, the US military, a few police departments, & the US Border Patrol use FN303 guns which can be loaded with paint pellets for deterrence & identification. They are also extremely dangerous & have injured people. Several countries use them.

The most notorious use of chemical dye water cannons was in apartheid South Africa against protesters in Cape Town in 1989 in what is now called the “purple rain protest.” For purposes of later identification, riot cops turned juiced up water cannons on anti-apartheid activists marching to the South African Parliament. One of the marchers wrested the cannon from the cops & directed it at the headquarters of the ruling apartheid party & a historic town house, dousing the buildings in purple. A graffiti artist later put “The purple shall govern” on a building & it became an anti-apartheid slogan because it echoed words in the Freedom Charter, the principles of the anti-apartheid movement (“The people shall govern.”).

Today several countries besides Indian-occupied Kashmir continue to use neon dyes (purple, pink, blue, green, orange), including Hungary, Uganda Bangladesh, South Korea, Indonesia; Israel uses it flagrantly in the West Bank. Many countries, of course, continue to use water cannons without the dyes. There are dozens of photos, most notably from the Philippines, of antiwar activists, housing rights protesters, & others being saturated. In one memorable photo from Manila, a young protester also wrests the hose from cops & turns it on them.