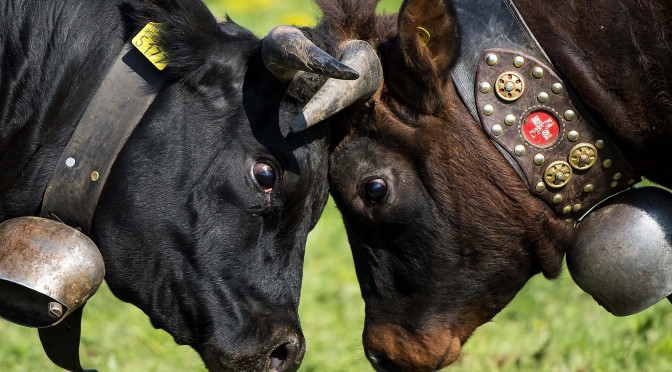 Anyone who admires cows will at first be quite indignant at this story. Every spring in Switzerland, cows & heifers from the Herens breed (Eringer in German) are made to fight one another in cow fighting contests. Unlike the barbarisms of bull-fighting, it is cow against cow, not human against bull to the death, but it still attempts to turn one of nature’s most docile & peace-loving animals into fighting machines.

They say the Herens girls are a feisty breed, more aggressive than an Angus or a Holstein or all the other breeds, but when it comes to aggression that sure isn’t saying much. To a cow, feisty means stomping hooves, bellowing & mooing, a little pushing & shoving, maybe a some head-butting & locking horns–& drooling, lots of drooling. These days, the Herens are bred specially for cow combat rather than milk & meat since the winner is crowned queen, garnishes a fancy cowbell & big bucks at market. (Now we know where beauty contests came from.)

The Herens are big girls but apparently have no killer instinct at all & are completely easy-going toward humans–except against the cow fighting officials who use cattle prods to induce them to exhibit some of that feisty. Those guys, called rabatteurs, apparently have to worry about a stampede from bovines reluctant to hurt one another or to engage in even mock warfare. One cow-fight enthusiast likened them to the Monty Python soccer game between German & Greek philosophers: lots of rumination, very little action.

An anthropologist from the University of Geneva studied cow fighting & concluded the competitions were used to resolve conflicts between people. That might be giving them more dignity than they deserve. But even an animal rights group that showed up to protest thought the cows, showing more aggression toward officials than each other, got the upper hand.

Humans can learn a lot from our bovine sisters: the next time military recruiters come calling, start mooing & pawing the ground & making like there’ll be a stampede.