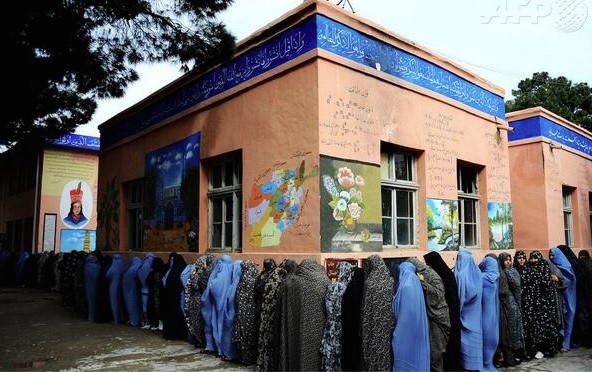 Human Rights Watch (HRW) posted this photo from Most Popular on Twitter on their own FB wall, headlining it “Courageous women queuing to vote in Afghanistan despite great risks.” The original tweeter said “They have more courage than I can ever hope to have.”

We always love to admire courage but we’re not getting where the courage is in lining up to vote in Afghanistan. Do they expect a siege on the election booths by the Taliban? The greater danger in Afghanistan is US-NATO occupation & the US certainly won’t be bombing the poll booths since they likely rigged the elections. They’re trying to get the government to sign that security agreement to keep US troops in the country & let them run hog wild without Afghanistan jurisdiction. They repeatedly threatened to pull out all US troops if Karzai didn’t sign it; now he’s nearly out of office & the troops & bombers are still there. But that was always a certainty: Karzai knew it; Obama & the Pentagon knew it; even we knew it.

The discussion on the HRW wall was the usual mix of Islamophobia & ignorant “bravos” but the comments from an Indian fellow stood out. He started with “Come on Middle East, come on educated muslims, come out & throw the Taliban, the Shariah Laws & the extremist muslims away into the gutter,” & went downhill from there. We don’t know much about the Indian elections except they’re the longest ones in recorded history & prime ministerial candidate Narendra Modi is called a fascist by the most reputable people. Modi has association with anti-Muslim violence in India & with whipping up religious conflict for electoral gain.

Islamophobia can certainly be ridiculed but it creates a political climate where idiocy & intolerance prevail. HRW certainly knew posting that photo would evoke such a clamor & in doing so they are part of the problem rather than fulfilling their stated mission of standing against persecution. Of course their stated mission is often at odds with their role, especially in Afghanistan where they do not oppose US-NATO occupation but only suggest some rules for making colonial oppression & bombing more humane.

US out of Afghanistan! US out of Iraq! (And we might add, “Cut the crap HRW!”)