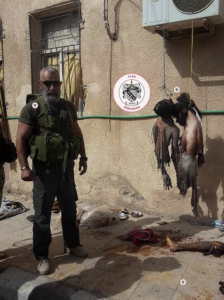 Normally gruesome photos should be avoided but we need to confirm if mainstream media was correct in identifying this soldier as 56-year-old Major General Issam Zahreddine who was just blown up by a land mine in Syria & who is being grieved & heralded by Assadists & other fascists as a hero for gallantry on the battlefield? Is this the guy Syrian revolutionists call the “Druze beast”?

Does that gallantry include beating arrested protesters in the 2011 popular revolution against Assad’s dictatorship? Does it include blowing up US journalist Marie Colvin & French photographer Remi Ochlik in 2012? Does it include threatening Syrian refugees if they tried to return home? Does it include war crimes like those here where he engaged in torture of war prisoners & the desecration & dismemberment of their corpses? Can they explain why Zahreddine is gloating over the bodies of half-naked ISIS fighters in Deir ez-Zor? Did they come to battle with their pants pulled down or were their bodies desecrated?

Assadists & other fascists are brushing off his war crimes because they were committed in the interests of national sovereignty. The question is: national sovereignty for who? The Assad dictatorship or the Syrian revolution against him? The answer is: the torture of prisoners & the desecration of corpses are war crimes condemned not just by international law but by every standard of human civilization.

Good riddance to the general. May he rot in hell.