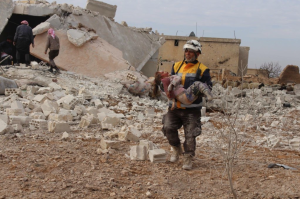 It’s hard to understand why the White Helmets have become such a target of vilification by Assad supporters. But of course they take their cues from fascist Vanessa Beeley, the Leni Riefenstahl of the Assad regime, who’s made a global industry out of denouncing the White Helmets as terrorists & agents of the CIA. It’s only irrational if you don’t know she takes her marching orders from Assad officials. They make it her professional assignment to smear & vilify any groups or individuals, including children & rescue workers, who document Assad’s bombing of civilians. The Assad narrative is that they’re bombing terrorists, not civilians.

This White Helmet rescue worker is in the rural southern part of Idlib province where Russian & Syrian bombers & helicopters are pummeling with explosive barrels dropped on civilian homes. At least eleven people, mostly children, have been killed, dozens injured, & hundreds are being evacuated. This is another one of those pictures worth a thousand Assadist lies. How does sifting through cement rubble for bodies & survivors while Syrian & Russian bombers are circling overhead serve Al-Qaeda & ISIS terrorists? Why would those who Assadists call “jihadi head-choppers” endanger their own lives to save others?

Stand with the Syrian people by demanding the immediate cessation of bombing & the immediate, unconditional withdrawal of all foreign military operations from Syria.