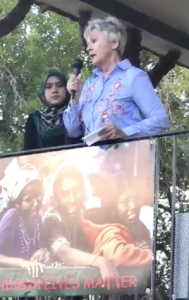 We had a wonderful Rohingya solidarity rally tonight attended by about 100 people. One of the doctors going on the medical delegation to Cox’s Bazar in November spoke & reported that there are 32 other doctors from across the US who plan on working rotations in the camps. The doctor said any donations would go from their hands directly to services to Rohingya refugees. They have set up a FB page & when I get the name of it, I’ll pass it on so you can donate to them if you wish. They’re a faith-based group & you probably couldn’t be more assured that what you donate will go entirely to refugees.

The other speakers included the Grand Mufti here & Sister Norma, the Catholic nun who organizes humanitarian support here for immigrants & refugees from Mexico & Central America. They focused on the sacredness of human life & our responsibility to support the Rohingya people. Special mention was given to the women who did such a great job of organizing the event including my friend Elena Ledesma Rashid.

The political movement here is less international in its vision that is necessary. That’s not unique to the valley but generally true about US politics right now. The Muslim community, with people from around the world, has brought that breadth of vision to political life here & keeps the spirit of international solidarity alive.