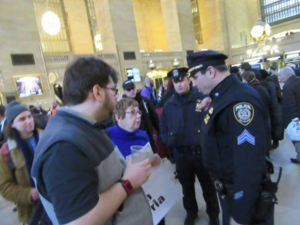 The Hands Off Syria Coalition, in its support for the Assad dictatorship, has destroyed the antiwar movement, divided & weakened the Palestinian solidarity movement, finished off what was left of a corrupt socialist movement. Now leading figures from the Hands Off Syria crowd are coming out with analyses of the Rohingya genocide to support Burma’s fascist military junta. They ignore genocide & portray the Rohingya as dominated by Wahhabi/Salafi terrorists armed by Saudi Arabia. Among those leading figures are fascists Eva Bartlett & Vanessa Beeley & Sara Flounders, a Stalinist activist since the 1960s.

Let me speak in the first person here since Flounders is an activist of my generation whose politics I have been at odds with since the 1960s. Her sectarian politics in the US antiwar movement have assured it remains fractured & insignificant. If the lilliputian cult she leads called Workers World cannot control the movement they do everything in their power to destroy it as a movement. So much so that under Flounders & other erstwhile socialists like Jeff Mackler, the US antiwar movement is led by retired FBI & CIA agents. For years, despite endless wars of monstrous barbarity, Flounders, Mackler, & other left cults refused to collaborate in united antiwar actions but each held their own which they could control. What brought them together in the Hands Off Syria Coalition was their mutual political corruption into sycophants to state power & supporters of fascism in Syria. They are now locked in the death grip of their fascist allies like Assad, David Duke, & other extremist right groups around the world. After they merged in the Hands Off Syria Coalition with David Icke & his disciples Bartlett & Beeley (who believe extraterrestrial reptiles that morphed into Jewish bankers run the world), it’s only a matter of time before they dissolve or collapse into a pile of horse manure.

Almost everything Flounders writes or speaks about Burma & the Rohingya people is a lie to support the fascist military junta. Her interviews & articles are being spread by Bartlett & Beeley who function as ventriloquist dummies for the Assad regime & on their own are incapable of thought. In a monotone that lacks all charisma but has the death rattle of fascism. Flounders explains her support for Burmese fascism & genocide by claiming the US only supports the Rohingya because the US wants military bases in Burma. She never does get around to explaining how the US supports the Rohingya or how she knows the Saudis support the Rohingya with arms & training. Instead, she switches the subject to Yemen to pretend Assadists & other fascists are not heartless monsters & to avoid condemnation of the genocide against the Rohingya people. How long will people allow these demented Stalinists & fascists to disorient them about whether to stand with fascists or with freedom struggles?

Woman in blue in this photo is Flounders disrupting a tribute concert to the White Helmet rescue workers held last March in Grand Central Station, NYC.

Stand with the Rohingya people against genocide & in their struggle for full human, democratic, civil, & refugee rights.