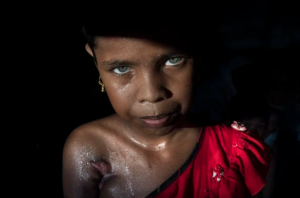 In the past couple days, CNN, the Washington Post, & Time (all US media) have published opinion pieces characterizing the Burmese military offensive against the Rohingya as genocide, not as ethnic cleansing as the UN & Human Rights Watch do. Time even highlighted this little girl, 11-year-old Azida Begum, who was shot twice (under her arm & on her leg) by Burmese soldiers, showing that Rohingya children are targeted in this genocide as much as adults.

Those who support the fascist Burmese junta & Suu Kyi & deny the genocide by claiming it is all “Wahhabi/Salafi terrorism” will pull their schtick about mainstream media being all lies but all they offer in rebuttal is Russian media sources when Russia is one of the biggest arms dealer to the Burmese military & has just negotiated billions in investment deals. We should use these reports in US media to build a solidarity movement for the Rohingya people in their struggle against genocide & for human, democratic, civil, & refugee rights.