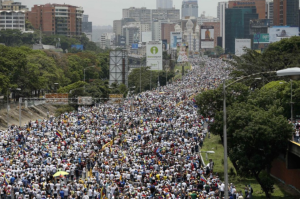 So much of the corruption of political theory began to emerge around Hugo Chavez & Venezuela. His Bolivarian-style socialism became cause célèbre for old-school Stalinists & the emerging forces of libertarianism. Criticizing him or his policies became regarded as heresy & all political opposition to his regime in Venezuela was excoriated as orchestrated by US operatives. Political sycophancy replaced political analysis, precisely as Stalinists related to the Soviet Union, to the Dilma Rousseff regime in Brazil, & as they now do to the Assad regime.

That political method–because Stalinism did not die with the collapse of the USSR & is not primarily a cult of personality so much as a political method involving obsequiousness to power–was simply transposed to the uprisings of the Arab Spring which were all indicted as street theater orchestrated by US undercover operatives.

Political analysis, which necessarily involves criticism, is not a form of one-up-man-ship or a way to display intellectual detachment & superiority. It is an essential process & part of understanding how to wrest power from the exploiters & change the world to the advantage of the oppressed, how to rid the world of inequality & the massive human suffering generated by it. Hero worship gets in the way of analysis just as uncritical adulation of Castro has blunted an understanding of Cuba.

When most of the left went gaga over Chavez & his Bolivarian revolution, when all political dissent within Venezuela was denounced as right-wing, it signaled the transition to libertarian theoretical methods & thuggish Stalinist political bullying against those who took exception to Chavez.

Now that we know such theoretics led to the full-blown capitulation before Assad’s dictatorship in Syria, we can take the rubbish about Venezuela on within a context it previously lacked. We now know the matrix of the degeneration into Stalinism-cum-libertarianism began with kissing the ass of Chavez rather than trying to understand the complexities & process unfolding in Venezuelan politics which so profoundly affected all of Latin American politics.

This is the April 19th protest in Caracas called by opponents of President Nicolás Maduro which they named “the mother of all protests.” Will these hundreds of thousands be denounced as liberals & fascists for protesting the Maduro regime even though it donated $500,000 to Trump’s inauguration committee (through Citgo Petroleum, a US affiliate of Venezuela’s state oil company), making it one of the largest corporate donors to that event? Or will political dissent in Venezuela be respected & championed as a democratic right? Unfortunately the Stalinist-cum-libertarian left is already calling for Maduro to crack down on protesters with the full weight of repression, just as they endorse carpet bombing of civilians in Syria.

We stand with the democracy activists in Venezuela.
Venceremos!