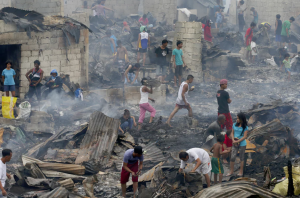 These slum residents in Navotas, a Manila suburb bordering Manila Bay, are sifting through the debris of a fire on Tuesday that left over 1,600 families homeless. Navotas is considered one of the worst slum areas in Manila & like other slums in other districts has been repeatedly hit with fires.

The resident’s suspicions are more than justified. These slum fires in Manila are part of scorched earth neoliberal economics which dispossessed hundreds of thousands of rural workers & farmers, replaced them with agribusiness plantations, & forced them to relocate into urban slums. Now, neoliberal urban policies are mandating privatization of public lands where many of the slums are built & forcing residents into relocating or homelessness. That’s why there are dozens of slum fires in Manila every year.

As part of the privatization policies, the Philippine Supreme Court ordered government officials in 2008 to demolish slum dwellings all along Manila Bay so multinational investors could build resorts, upscale shopping malls & condominiums, golf courses, free trade zones. Then Philippine president Aquino & other officials made it clear they intended aggressive action to clear out the tens of thousands of slum residents & relocate them to rural areas with no possibility for employment. Because the resistance of slum residents to evictions has been so forceful against bulldozers & riot police, officials long ago took the line of least resistance by resorting to arson.

This fire in Navotas highlights the deadly intersection between scorched earth economics & Duterte’s vigilante war on drugs. Police & fire officials made a mockery of forensics by claiming within only 12 hours of the fire that initial investigation showed the cause was a candle left unattended by drug users during a methamphetamine session. The Navotas police chief said many of the residents were drug users & pushers, that the slum was considered Manila’s “most notorious community,” & that it had become a safe haven for criminals & murderers to hide out. As a result, the area was being cordoned, residents would not be allowed to return & would be forcibly relocated. Usually residents with no place to go just rebuild on the same site. Now the drug war justifies forcible removal.

The published kill list of 520 drug war victims in the first seven days of Duterte’s reign of terror (July 1st to 7th, 2016) included 17 victims from Navotas. When the year 2016 ended, there were well over 6,000 victims, likely a very large number from Navotas although the figures are not available.