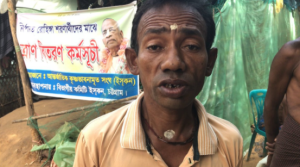 Documentary filmmaker Shafiur Rahman, who has been reporting from Bangladesh since this genocidal onslaught began, interviewed this Hindu refugee on video about media reports that Rohingya Muslim terrorists are executing Hindus & dumping them in mass graves. The source media cite for this information is the Burmese government carrying out genocide against the Rohingya people.

This fellow who witnessed events described how a death squad of masked men dressed in black who he did not recognize laid siege to his village for five days & executed Hindus & Muslims alike. Reuters & other media sources could do the same thing as Shafiur Rahman if they really want to know what happened. They could interview not just this man but other Hindu as well as Rohingya refugees from the same town. They could try to find out if the Burmese army is engaged in genocide against Hindus as well as Rohingya in Arakan state. Instead media plays ventriloquist dummy to the Burmese generals. What kind of journalism is that?

(Photo is screen shot from video)