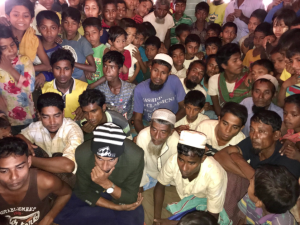 Documentary filmmaker Shafiur Rahman has played a remarkable role documenting the Rohingya genocide without an iota of compromise & fully on the side of the Rohingya people. He recently completed a film about the Burmese military & nationalist death squad massacre in the Arakan village of Tula Toli. The massacre began August 30th when Burmese soldiers surrounded the village, shot every adult & teen & threw infants & children into the nearby river. It went on until the village was demolished & every resident was murdered or managed to flee.

This photo is Tula Toli survivors & other Rohingya refugees in a Bangladeshi refugee camp watching a screening of Shafiur Rahman’s film about the massacre. Part of refugees coping psychologically with the horrors of losing many loved ones & feeling helpless to defend them is acknowledgement by others of the massacre. The film will be released to the public soon.