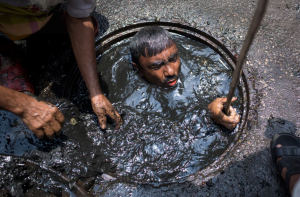 Working conditions for millions of people in this barbaric phase of capitalism, during the reign of sweatshop economics, must surely be worse than during the Industrial Revolution. Or if not worse, at least affecting the lives of millions more people, including small children, & making their lives a living hell. It’s as if the neoliberal predators have decided to reverse history, but skipping feudalism, make a straight shot back to slavery.

Probably the worst manifestation of this is the mountains of toxic landfill that Europe & the US deposit in the plundered countries which the world’s dispossessed & urban slum dwellers work for recyclables. Their health & safety are in constant peril from being buried in shifting piles of landfill to the toxic chemicals, human & animal poop, rotten, decomposing food, & unmentionables they have to pick through to earn a few bucks a day.

The job of sewer cleaners in Dhaka, Bangladesh must surely rank as one of the worst & most dangerous in the world. There isn’t much information available but it is reported there is a rise in deaths among manhole workers who enter the sewers without protective equipment of any kind. That’s how cheaply human life is valued these days.

This man is a city worker (that’s a good job in most places, with decent wages & benefits) who has to enter the toxic sludge (we’re talking poop) emitting poisonous fumes to unblock sewer lines with his bare hands. The list of possible respiratory, skin, infectious diseases he could contact is a mile long including botulism, cholera, dengue, diarrhea, hepatitis, hookworms, malaria, scabies, typhoid, polio, ring worm.

We know the supremacist song & dance about Bangladesh being one of the “developing countries” but that’s as much manure as what’s this man is choking in. The number of billionaires in Bangladesh has more than tripled in the past decade (according to the central bank) precisely because the capitalists who run the country are making a killing by turning it into a sweatshop haven. That works out swell for the local oligarchs & for western garment & other sweatshop operations but to working people it’s an abomination.

Nothing is too good for working people. Workers’ rights are also human rights.