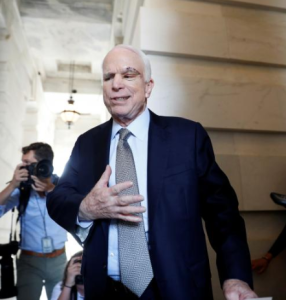 For Senator McCain to drag his bony ass out of a death bed to deprive millions of working people of shoddy healthcare plans makes him not just a putz but an utterly contemptible one. Him, with the best healthcare plan in the world at taxpayer’s expense.

We don’t lower ourselves to his level to wish evil on him. At least not in this world. But when he croaks, let him rot in hell for all eternity. Amen.