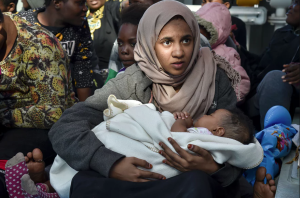 From 1988 until today, it is estimated nearly 27,000 refugees have drowned attempting to cross the Mediterranean to Europe. There were no organized search & rescue operations until October 2013 when the Italian coast guard initiated Mare Nostrum—although Mare Nostrum was as much border patrol as search & rescue. That year there were nearly 3,300 drownings.

Mare Nostrum ended after one year in October 2014 because Italy was no longer willing to sustain the cost alone. In November 2014, the European Union launched the Frontex Operation Triton & in April 2015 Operation Sophia (also called European Union Naval Force Mediterranean). Neither of these naval & air operations involving several European fleets engage in search & rescue but only in surveillance & deterrence of immigration. They purposely do not operate within Libyan waters where many of the boats & dinghies capsize & rescue operations are required. There are also Frontex & NATO fleets in the Aegean Sea to deter refugee flight from Turkey to Greece.

All sorts of military & commercial vessels travel through the Mediterranean & according to maritime law are required to rescue any they see in danger. The maritime Rescue & Coordination Centre in Rome, along with Frontex, has the Mediterranean under constant surveillance & can order a ship to rescue those who are drowning. In 2014, the International Chamber of Shipping claimed 40,000 refugees were rescued by commercial vessels but there is no independent corroboration of that & quite frankly, it’s not that believable.

The job of search & rescue has been left entirely to NGOs. The most prominent & extensive operation is Migrant Offshore Aid Station (MOAS) which launched on August 2014 & is headquartered on Malta. It was started by Christopher & Regina Catrambone who became millionaires selling insurance to those operating in war zones. They were on a vacation cruise in the Mediterranean & passed near Lampedusa just after a shipwreck where 700 refugees had drowned.

The Catrambones were horrified that as they leisure cruised across the sea, thousands were drowning. They decided to launch MOAS, now the primary search & rescue agency in the Mediterranean. Médecins Sans Frontiéres (Doctors Without Borders) initially partnered with MOAS to provide medical aid on the rescue ship but later launched two of its own rescue vessels. NGOs in other countries including Greece, Norway, Spain, & Germany do not yet have regular operations but run them periodically. MOAS is now a high-tech operation with drones for surveillance & patrolling, medical operations on board, & even night rescues.

Since it is estimated there are 500,000 refugees waiting in Libya to cross, rescue operations are inadequate to the task. We know that because this year has the highest drowning rate on record. NGOs wrestle with the issue of taking over search & rescue operations versus using resources to campaign for the EU to stop impeding immigration & start massive rescue operations. What is required to change this horrific situation is an international clamor for refugee & immigrant rights.

Earlier this year, MOAS launched a South East Asia mission in the Bay of Bengal, Andaman Sea & adjacent waters to respond to the crisis of Rohingya & Bangladeshi refugees being stranded at sea. No other agency or government has done one thing to address that major human rights disaster. On March 3rd, after several months of negotiations with human rights groups & governments in the region (particularly Thailand), they moved their rescue ship into the Andaman Sea to begin operations.

The initial mission was exploratory & intended to last four weeks. It was dependent on coordination with the Thai military junta & governments of Malaysia & Indonesia. After the Thai military refused to release two surveillance & patrol drones necessary to the operation, MOAS was forced to scrub the operation after only two weeks. In an email today, MOAS explained that they don’t intend to resume operations there any time soon. So now we know where the Thai military regime stands on the question of Rohingya genocide: comrades-in-arms with the Myanmar junta executing the genocide.

If anyone is looking for a place to contribute aid for refugees, MOAS & Médecins Sans Frontiéres (Doctors Without Borders) are always soliciting donations. You can donate through their websites:

This young mother & her child were rescued off the Libyan coast just a few days ago.