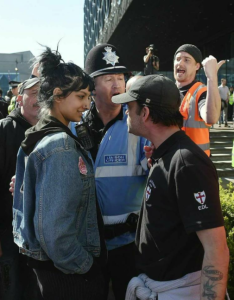 Saffiyah Khan, a Muslim woman from Birmingham, England, stepped in when Ian Crossland, a leader of the extreme right-wing English Defence League & 20 EDL supporters tried to bully a woman in a hijab who was giving them the business verbally.

The big bad fascist bully-ass taken down by a nonchalant, cool-as-a-cucumber Muslim woman. Now that’s terrorism for you. He won’t be able to go out in public again strutting like macho-man. A pipsqueak brought down to size.

Ah the sister does us proud. The photo can’t be shared too much.
(Photo by Joe Giddens/PA)