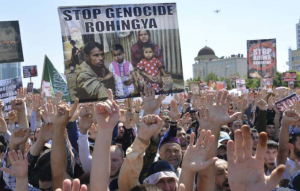 Is it possible for Russia to engage in humanitarian bombing of civilians in Syria whilst supporting the Burmese military junta in its genocide against the Rohingya? Only in the twisted politics of libertarian rednecks. Perhaps Russia’s role in Burma needs to be laid out to show the character of the Putin regime & expose the lies about its role in Syria–as if bombing civilians weren’t sufficiently damning.

Russia is one of the primary arms dealers to Burma, along with Israel, India, & China. They sell Burma arms, fighter jets, & advanced artillery systems to conduct genocide against the Rohingya & war against other ethnic groups at war with the regime. Last month, the Russian Foreign Ministry issued a statement strongly backing the military onslaught in Arakan state & blaming the violence on ARSA insurgents. There’s no playing dumb here. Russia is fully apprised of the scale of genocide in Arakan state & fully supports it.

Russia & China also ally to provide diplomatic protection at the UN Security Council where they used their veto powers in March & again last week to block statements of concern about the Rohingya. Statements of concern; not even condemnations of a genocide.

That’s what makes the Rohingya solidarity protest in Grozny, Chechnya, numbering in the tens of thousands, & protests at the Burmese embassy in Moscow, estimated at 800, so significant. It is estimated that Russia has nearly 16.5 million Muslims. Chechnya with a population of 1.3 million is 95-percent Muslim. The protest in Chechnya was called by its autocratic leader Ramzan Kadyrov who once called Chechens “foot soldiers in Putin’s army.” In one post on Instagram (later deleted), Kadyrov openly challenged the Kremlin saying “If Russia is supporting these devils [the Burmese junta] who are committing crimes, then I’m against Russia’s position.” We’re talking chickens coming home to roost.

When you understand Russia & China’s emerging new role in world politics–as a reactionary counterbalance to US & European power–then the new political alignments between Stalinists, libertarians, fascists begin to make sense. It isn’t that there should not be a counterbalance to US & European hegemony; there most certainly should be. It’s imperative. But that counterbalance is not Russian & Chinese militarism. It is the forces of solidarity assembling against war, occupation, genocide, in defense of Muslims under attack as in Syria, India, Kashmir, Burma, & in defense of all the oppressed.

Photo is protest in Grozny, Chechnya standing in solidarity with the Rohingya people.