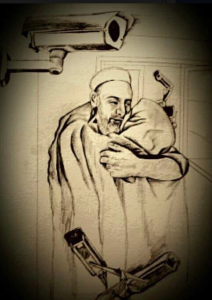 Resuming posting after my Facebook suspension with this illustration by Rollie Mukherjee for a newsletter some months back. Rollie says about this work, “This work I did on the intrusion of private spaces…the disproportionate policing & surveillance of Muslim community……….criticizing the CVE policies worldwide.” With the US Supreme Court decision upholding the Muslim ban, discrimination against Muslims is now embedded in law & we can be sure Islamophobia will be whipped to fever pitch in justifying war, occupation, genocide. Responding to it & defeating its malignancies remains a pivotal political responsibility of our times.