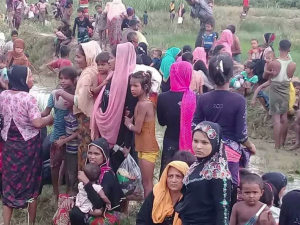 These are among five-thousand Rohingya, mostly women & children, stranded on the banks of the Naf river at the Burma-Bangladesh border. Many have managed to cross into Bangladesh but thousands are being denied asylum & many who managed to cross are being forcibly returned to Myanmar by Bangladeshi border patrol under orders from the government.

Since Friday when the Aung San Suu Kyi regime relaunched a genocidal assault on Rohingya in Arakan state, an estimated 15,000 Rohingya men, women, & children have taken shelter in hills & forests; nearly 500 Rohingya men, women, & children have been killed by gun fire, arson, & slaughter; 1,000 are seriously injured; 300 to 400 houses have been torched along with mosques & other buildings; livestock have been killed in large numbers.

We stand in full solidarity with the Rohingya struggle against genocide & for human, democratic, civil, & refugee rights.