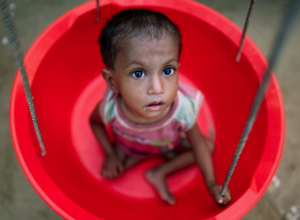 The plight of Rohingya refugee children remains very grave, including the threat of malnutrition & infectious disease & the large number of children who were orphaned or were separated from their families in the flight from Burma. There have reportedly only been hit or miss attempts in the camps to help reunite children with their families & to identify those who have been orphaned & set up guardianship so they cannot be preyed upon. It’s a priority to establish a child protection system in the camps since it’s reported that human traffickers are already on the prowl posing as relatives or social service agencies.

Here a Rohingya girl is being weighed at an emergency nutrition center in Cox’s Bazar.