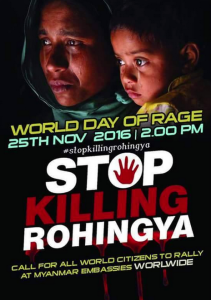 The Myanmar military junta have been on a genocidal rampage in Arakan state for 48 days–torching villages, raping women, beating, torturing, arresting hundreds, killing & injuring hundreds, displacing 40,000 Rohingya Muslims & forcing them to flee to Bangladesh for asylum.

The pretext for the siege was the killing of nine border guards at Myanmar-Bangladesh border stations. The assailants remain unknown. But the junta blamed Rohingya Muslim terrorists linked to foreign operatives (presumably ISIS or al-Qaeda) with no evidence of their existence. The junta justifies their violence as the hunt for those terrorist cells.

What is known now is the complicity of Aung San Suu Kyi with the genocide. When the historical record is corrected, Suu Kyi will not be known for the title & sinecure she held in the regime but as the face of genocide. Her Nobel Peace Prize will be regarded as one of the sarcasms of politics in the barbaric phase of capitalism.