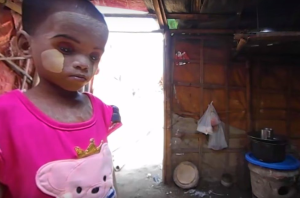 The World Food Programme (the UN food assistance program) estimates that 80,500 Rohingya children in Arakan (Rakhine) state, Myanmar under the age of five will need treatment for acute malnutrition in the next year. That means they’re starving to death & the primary treatment for that is food. They base this estimate on an on-the-ground investigation where they interviewed 450 families in 45 villages in Maungdaw district, just one of the five districts in Arakan. This is likely an underestimate since the UN does not have starvation statistics from the concentration camps where at least half of the residents are children.

The situation is so alarming that the NY Times posted an article about it by Women In The World which featured this little girl, 4-year-old Rosmaida Bibi, who is barely the size of a one-year-old. She lives in one of the concentration camps where the Aung San Suu Kyi regime forcibly confines Rohingya.

According to a UNICEF report in May, the situation in all of Myanmar for child malnutrition & starvation is a catastrophe because of the military campaigns the government is conducting against ethnic groups in Kachin, Shan & Kayin states & other areas. UNICEF estimates 2.2 million children are affected by the violence, by human rights crimes against children including trafficking & denial of health & education services & that every day in Myanmar at least 150 children under the age of five die from starvation.

The UNICEF report said the “fruits of rapid development & reconciliation efforts” by the Suu Kyi regime have not yet reached “remote, conflict-affected regions” of Myanmar. There’s a point at which such diplomacy becomes outright & deliberate deceit & obfuscation. Which reconciliation efforts is UNICEF referring to? The ethnic cleansing siege in Arakan state that forced 75,000 Rohingya to flee for their lives? That executed, mass raped, tortured, incarcerated thousands of Rohingya since October? If the Myanmar military can get its troops into those remote regions & multinational mining firms can move their equipment in to expropriate lands & destroy the environment, why can’t they get food aid to starving children?

(Photo is Rosmaida Bibi from YouTube via NY Times)