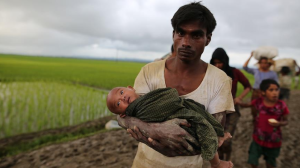 According to the Dhaka Tribune, about 100 Rohingya babies have been born on the border since the refugee crisis began on August 25th. Births were carried out without medical care & under dangerous, unhealthy conditions. It’s likely some of those babies were born premature. Imagine being in the final stages of a pregnancy when the military or paramilitary death squads attack or torch your village & having to flee on foot nine months pregnant. The paper reported that most mothers & newborns had critical health conditions as a result.

Our protests must demand an end to genocide & human, democratic, civil, & refugee rights along with demanding massive humanitarian aid to the refugees, including healthcare addressing the particular needs of women & children.