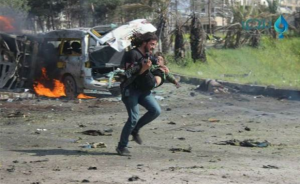 The English journalist Robert Fisk speaks English & Arabic but it’s no use since he has marbles in his head. He’s always been patronizing & orientalist about Arabs & Muslims but ever since he was embedded up the ass of the Syrian army he’s become a pathetic figure in journalism & apologist for Assad. Not unlike Tariq Ali on FB posting hateful Islamophobic bloggers, US generals, Eva Bartlett the David Icke apostle, Mint Press, & Global Research for his resources on Syria.

Fisk’s new piece of Assad apologetics is titled “If Trump cares so much about Syrian babies, why is he not condemning the rebels who slaughtered children?” He nailed Trump. Skewered him politically. Took him down & Ivanka too. But what did he expect from the orange pumpkin? Isn’t Fisk concerned that all the Assad libertarians will be offended by this article since most of them are strong supporters of Trump? What about Assad gassing civilians?

Fisk portrays the conflict in Syria as a civil war between Assad & “jihadi head-choppers” so we would like him to explain this iconic photo of 23-year-old Abd Alkader Habak, a Syrian revolutionist who was taking photos of Syrians being evacuated near Aleppo when the suicide bomb exploded. He was thrown to the ground by the blast but got up to rescue injured & dying children. The politics of their parents were of no interest to him. Their humanity was.