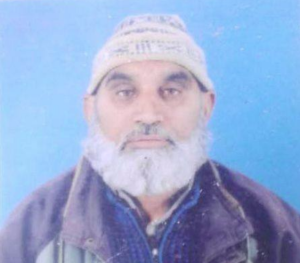 We should take a moment to honor 70-year-old Kashmiri freedom activist Gulam Hasan Malik who just died in prison. So many millions around the world have died fighting tyranny; most are unknown. We honor all of them in honoring this Kashmiri freedom fighter:

“A famous militant of the ’90s and a popular pro-freedom activist in north Kashmir, 70-year-old Gulam Hasan Malik, better known as Noor Khan, died on Tuesday at Government Medical College Jammu a day after he was shifted to the hospital from Kot Balwal Jail, where was imprisoned under the draconian Public Safety Act (PSA) since January 27 this year.
A native of Gulistan village in Narvaw Baramulla, Gulam Hasan had his present house in Pehlipora Uri. He was arrested by Baramulla police on January 22 and a PSA detention order was slapped on him on January 27, after which he was shifted to Kot Balwal Jail in Jammu.
Gulam Hasan fell ill a few days ago while in Kot Balwal Jail. On Monday, he complained of serious pain in his chest, family sources said. The jail authorities shifted him to GMC Jammu on Monday evening. He breathed his last there today afternoon at about 3pm.”