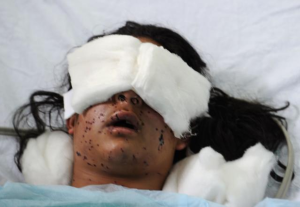 Yesterday, I posted about Assadist propaganda vilifying & mocking the suffering of children in Syria–children who have lived through five years of daily bombing, sustained injuries, permanent disability, psychological trauma, lost parents & beloved, witnessed others buried alive in rubble or blown apart by bombs.

In the post, I said that in 50 years of antiwar activism I had never before seen children exploited with such malice, that it seemed the unthinkable & a violation of the sacred. I was speaking of its use only by those who organized against wars & should have made the distinction that targeting children for violence is a mainstay of racism & war-mongering.

These are among the most prominent uses of children in propaganda which expose the ideological current Assadism belongs with:

1) Prior to the US civil rights movement in the 1960s, “pickaninny art” was an ubiquitous form of anti-Black propaganda; it appeared on postcards, calendars, books, cartoons, magazines, newspapers. The most common theme was a Black infant holding on to a twig suspended over an alligator pit. This genre of hate literature inculcated racism in white people at the same time as it expressed fear of Black youth rebellion against oppression.

2) Human rights groups have condemned Israel for targeting children in their massive bombing campaigns over Gaza, including bombing schools, refugee centers, hospital, residences, public parks & beaches. During the 2014 bombing that lasted seven weeks, the despicable Elie Wiesel put out a full-page ad in international media claiming Palestinians used their children as human shields. Israel has long claimed that to explain away the high fatality & injury rates of Palestinian children by the Israeli military.

3) Kashmiri activists have written cogently over the course of the occupation & particularly during the current military rampage of how Indian occupying forces target youth in arrests, torture, detention, disappearance. In the current siege since July 8th, the number of small children down to the age of four & youth who have been injured, disfigured, permanently disabled by pellet munitions is in the several hundreds. Some are blinded in both eyes, some only partially blinded; most will suffer lifelong health problems from lead pellets that cannot be extracted from internal organs.

The photo is 14-year-old Insha Malik, blinded in both eyes by pellets in July, just after the current military siege began in Kashmir. She was hit by nearly 100 pellets while inside her family home.

The targeting of children is systematic because the oppressors are terrified of every new generation whose spirit of defiance must be broken, who must by violently inculcated with self-hatred & fear of oppressive authority. Against rebel youth, they set armies to disable or kill the spirit that stands fearless & steadfast against oppression. Assadist propagandists draw from this same cesspool of racism to generate their attacks on Syrian children as budding “jihadists.”

To stand with the children of Syria, Palestine, Kashmir, Iraq, Yemen, Afghanistan, Libya, Somalia, & the Rohingya we must demand no to war, no to occupation, no to genocide, no to colonialism.