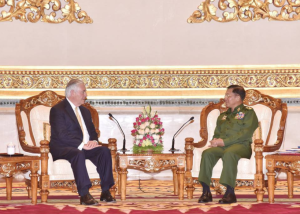 US Secretary of State Rex Tillerson flew from the ASEAN summit in the Philippines to Burma to discuss the Rohingya genocide with General Min Aung Hlaing & Aung San Suu Kyi. Some media reported high expectations for this visit, hoping the US would lower the boom on the military after nearly three months of a genocidal offensive causing close to one million Rohingya to flee for their lives. No media has the right to play that stupid in the face of genocide. Credulity in the epoch of realpolitik can be collusion.

Tillerson spent a total of five hours swapping spit with Suu Kyi & the general. It was a dog & pony show where Tillerson dutifully expressed horror about the “crimes against humanity” in Arakan state, suggested the junta conduct a credible investigation into the charges, said those individuals responsible for “unacceptable” acts should be hit with “targeted sanctions”, expressed his opposition to “broad-based economic sanctions” against Burma, & reaffirmed US commitment to Burma’s transition from a military dictatorship to a civilian government. No matter how your parse it, the outcome is that the US will continue to do nothing to stop the genocide or provide humanitarian assistance & asylum to the refugees.

If you read US government documents detailing economic & military sanctions imposed on Burma since 1997 (lifted under Obama in 2012), it’s clear the US knows exactly which Burmese individuals are involved in human rights crimes against the Rohingya people. The US knows the junta controls the Burmese economy, including drug trafficking; it knows the military continues to control the government, that the quasi-civilian government headed by Suu Kyi is a front for the military, & that the civilian government is also directly implicated in the genocide against the Rohingya. But the US, EU, & Canada cultivate the fiction of a civilian government so they can continue to invest in the Burmese neoliberal gold rush. Russia, China, India, & Israel don’t give a rat’s ass if Burma is fascist or not when they sell arms to the junta since they have a way of “handling” dissent.

The body that controls Burmese politics, the highest authority in the government is the 11-member National Defence & Security Council (NDSC) headed by General Min Aung Hlaing. He’s the architect of the Rohingya genocide & has been since he took over the military in 2011. The only civilian members of the NDSC are Suu Kyi, two lawyers from the so-called civilian government, & the two Burmese vice presidents who retired as high-ranking generals to become part of the civilian government. There is no distinction between the military & the civilian government & that is what makes Suu Kyi a partner in genocide with the generals, not a counterbalance to fascism. Burma is a fascist dictatorship & there is no reforming such a regime.