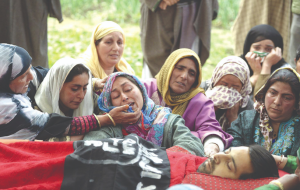 This is a deeply tragic story, one of many in occupied Kashmir. Sharjeel Ahmed Sheikh was a 27-year-old taxi driver who lived with his family in the Kulgam district of South Kashmir. He was the sole support of his family, including his father, ailing mother, & a younger brother. His family was making preparations for his marriage on the 15th of April.

On Wednesday, April 11th, the Indian occupying army & special forces were involved in a late night hunt to kill operation in his neighborhood & residents of the area were alerted to come out in defense of the militants being hunted down. The troops opened fire on the unarmed civilians & fatally shot four, including Sharjeel who was not a part of the protest. Media reports are somewhat delicate, but he was either taking a bath or using the toilet at a neighbor’s house when he was hit in the chest with one of the bullets. He died on the way to hospital.

His death just left a whole world of suffering to many people, including his fiancée & his immediate family. Not just the emotional wreckage but his parents relied on his work for survival, especially his mother who is ill. Kashmir is under Indian rule & India has no social security provisions for elderly or disabled so his death is a devastating emotional, social, & economic loss to the family. May he Rest In Peace.

(Photo of Sharjeel Ahmed Sheikh’s funeral from The Kashmir Monitor)