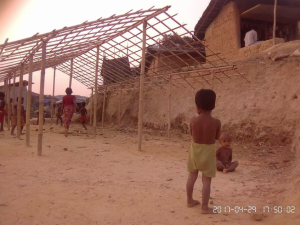 A report by Rohingya schoolteacher & refugee Anayet Ullah Arman about the situation of refugees in Bangladesh after the destruction of their shelters in the monsoon.

The #Myanmar cruel government and atrocities of security forces burnt down their houses and made them homeless.So that, Circumstance compelled them to become refugee in Bangladesh. Hence, In October, 2016 a violent Military crackdown ” clearance operation ” forcefully pushed them accross the border into #Bangladesh. undocumented Myanmar national, Now they are without refugee status, adequate food, shelter and access to medical care.

Now at present moment the #Rohingya #refugee are living inhumanly in #Makeshift_shelter. Their thatched shacks are fragile and flimsy structures not suitable for human inhabitation, monsoon and strong storm. When it is raining heavily. Then their huts become muddy. So, they can’t sleep at night and day. Indeed, the plight of Rohingya refugee is so worsen in Makeshift settlement in Bangladesh. And also recently they are effected by #cyclone_Mora.

Now it is rainy season in Bangladesh. During June and July there is plenty of torrential rains and Cyclone.