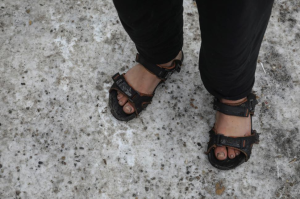 A refugee in freezing temperatures in Belgrade, Serbia stands with other refugees outside an abandoned gutted warehouse where they live protesting to demand the EU open the borders.

They have decided there isn’t a damn thing noble about putting up with the slings & arrows of outrageous & barbaric EU refugee policies. But if their protest is to have any political power at all it must joined by battalions of international solidarity or they will be freezing their asses off till the cows come home.

Open the damn borders. Asylum for refugees is not just international law but is written in our DNA. We have allowed politicians to get away with criminalities like this long enough. We can’t allow capitalism to turn us into monsters by turning a blind eye or accepting this as the norm.