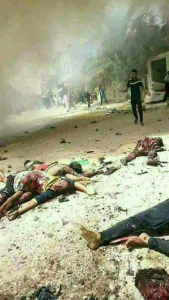 Scene from the US-led coalition “liberation” of Raqqa, Syria (160 km / 99 miles east of Aleppo).
The US is bombing with white phosphorous & has ground troops deployed to take out ISIS fighters estimated between 1,000 & 4,000 in a civilian population of 340,000.

Any questions about that deranged proposal for a US-imposed No Fly Zone? Defeating ISIS means cutting the weapons supply lines. But how can the US fight ISIS when according to the US Department of Defense it has supplied over $1 billion of weapons to ISIS fighters?

US & all foreign military forces out of Syria. End the bombing. End the war.

UPDATE: Haseeb Rahman has shown a media report that this photo is from the Mosul Apocalypse where the US is also using white phosphorous on a civilian population of tens of thousands.