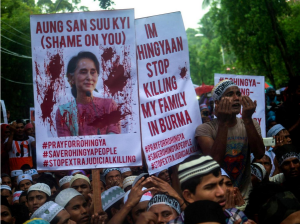 Rally at the Myanmar embassy in Kuala Lampur, Malaysia on Friday, the international Day of Rage against genocide by the Burmese military of Rohingya Muslims:

It’s entirely likely the Myanmar military junta, in an act of cynical realpolitik, made Aung San Suu Kyi the facade for genocide & of a democracy that does not exist under their rule. She can travel the world drumming up investments in Myanmar & feted as a human rights champion whilst the military goes on rampage in Arakan state. Those who honor her don’t ask questions; if a reporter slips one by about the Rohingya, she answers with her mantra “it will all be investigated in due time.”

Suu Sky is no ventriloquist dummy. She knows her assigned role & has demonstrated over & over again her wholehearted complicity in genocide. Suu Kyi won’t go down in history as a champion of democracy but as a defender of genocide & exploitation. A legacy of shame in exchange for a titled sinecure & some worthless honorifics.

The contrast is dramatic between the vilification of Fidel Castro, who was never accused of genocide or of complicity in human rights crimes of such proportions, & the glorification of Aung San Suu Kyi who is the public face of genocide in Myanmar. Cuba sustained a US embargo whilst investment money from the US, Europe, India, China, & elsewhere is pouring into Myanmar.

The international solidarity movement in defense of Rohingya Muslims has emerged–thanks to the efforts of Rohinga in exile.

End the genocide against Rohingya. Full human, democratic, citizen rights for Rohingya in Myanmar. Full refugee rights for those in exile.