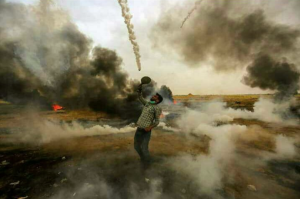 Rabid Islamophobia combined with anti-Semitism should stick out like a sore thumb to those who actually wade through the rubbish posted by Assad propagandists & their guppy squad. The Islamophobia is arrant in their portrayals of armed militias using the inflammatory rhetoric of the war on terror: the head-chopping jihadi, Wahhabi/Salafi stuff. The propagandists themselves are, for the most part, too slick to openly, or at least often, express their hostility to Muslims & Jews–although Bartlett & Beeley both publicly associate with David Icke (Bartlett even edited for him) who believes extraterrestrial reptilian Jewish bankers called the Illuminati rule the world. Icke’s ideology is nuts but it’s also dangerous politically & has thousands of disturbed adherents–many of whom are Assad supporters via Global Research & other libertarian journals. The attraction of so many anti-Semites (& fascists) to Assad is most likely based on the historic persecution of Jews under the Assad dynasty & the eventual flight of all of them. The last Jews in Syria left Aleppo during the 2016 bombing siege by Syria & Russia.

That’s why the photos of an Israeli man humiliating an African refugee were posted by several Assad supporters with coy or snide suggestions about the Israeli guy’s religion rather than his political philosophy of Zionism. That’s not a minor confusion. It’s the bedrock of anti-Semitism. If you don’t hate on Jews, it would be unthinkable to make that kind of imputation against Judaism. It was a horrific incident; as horrific as seeing Israelis perched in easy chairs, sucking down beers, & watching the 2014 bombing siege of Gaza. Despite living through all that, Palestinians do not condemn Judaism but are merciless in their condemnations of Zionism. Palestinians long ago proposed a democratic, secular state where Palestinians & Jews will live as brothers & sisters. They saw it as the only workable solution to the mess Zionism, in league with the US & UK, have made. Those who undermine that proposal by associating Palestinian solidarity with anti-Semitism are political dry rot & of no value except to the fascist cause.

Photo is Palestinian returning tear gas canister dropped by drone at Great Return March. If Palestinians can be put through this hell & still call for a united state with Jews, anti-Semites have no right to sabotage that.

{PS: I’ve chosen not to post the photo of the Israeli man & African refugee. It’s pornographic in its own way & inflammatory.)