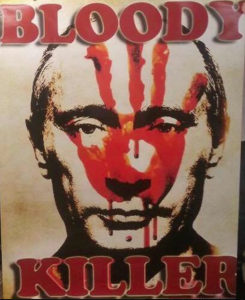 Let’s be frank: the Russiagate investigations are a bore. Of course Putin intervened into US elections–just as the US does in other countries all over the world. So now we know the corrupt role both major parties played in that fiasco. This has given political writers like Glenn Greenwald & political currents like fascism & libertarianism the occasion to blither nonsense about a new Cold War & the new McCarthyism. Well let’s talk about the Putin regime outside the US elections–about its repressive rule in Russia & its continuation of the Stalinist gulag, about its carpet bombing of civilians in Syria, its repression in Chechnya, it arms deals with the Burmese fascist junta.

The real questions that need to be asked about Russia & Putin have nothing to do with the US elections but with its thuggish military role in international politics. What concerns the US government is not Russia messing with US elections but the competition Russian & Chinese capitalism represent on the world stage, economically & politically. You don’t address that by making Putin a champion of the people when he is responsible for carpet bombing in Syria & arming genocide in Burma. You don’t have to be a socialist to recognize those basic realities of international realpolitik.