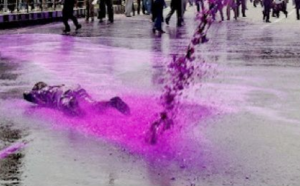 For several years, the purple rain strikes of government workers in Kashmir received regular photojournalist coverage but little media elaboration of the issues at dispute–which remain unresolved. Workers were demanding payment of wages in arrears, that contract employees be made permanent, & that retirement age be raised by two years (because India has no social security).

What was striking about them was not just that none of the issues were resolved after years of protests & work stoppages but the extremes of violence against the strikers, especially the use of water cannons with purple dye. The dramatic imagery may be what attracted media coverage although there were also many photos of physical assaults on strikers.

During the recent horrific military siege in Kashmir, there was another round of this strike involving contractual medical staff in the national health service who are not part of permanent medical staff–creating a two-tier system of employment & conflict. The issues were important not just because of their labor ramifications but because of how they intersected with the occupation & emergency medical treatment for injured protesters especially in the more rural areas.

Because the military siege was so pressing, a post discussing the labor dispute became a low priority even though it related to emergency care for protesters. The strike issues have not been resolved so a later post will address them. There is also considerably more information available now about those issues.

I only bring this up because in that memory thing Facebook does, a post popped up about that strike on May 9th 2012. It was after Kashmiri activists were on my case to study their struggle & write about it but before I had actually done so & knew nothing about the occupation. So in that post & in others, I refer to “Srinagar, India” & reveal other similar ignorance. In the interest of veracity & not just to hide my ignorance I am correcting the posts.

This is one of the purple rain photos from that May 2012 strike where we can see how really aggressive the water cannon is as a weapon.