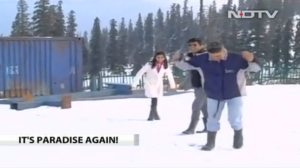 There’s something not quite right about tourists who think of the brutal military conflict in Kashmir only as an inconvenience & delay to enjoying the ski slopes there.

Indian NDTV showcased a group of tourists from South Africa (need it be said white South Africans?) taking the “unforgettable” gondola ride up Gulmarg, a mountain range in the Himalayas popular among tourists.

NDTV reported that the “violent protests across Kashmir” since July had taken a toll on tourism but it is now making a comeback. One of the South Africans said “We plan to return to Kashmir next year. The situation in Kashmir was bad for some time, but that does not matter.” Maybe the problem is worse than “not quite right” but full-blown psycho stuff rooted in apartheid.

Kashmiris often testify to the beauty of their country but who with conscience can ignore the violent occupation just to ski & go sightseeing?