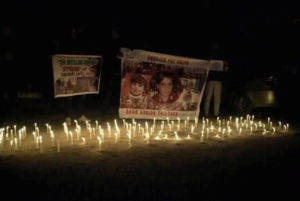 Kashmiri & Indian media report the resignation of two cabinet ministers from India’s ruling party, the Bhartiya Janata Party (BJP), who attended & spoke at a nationalist rally last month in Jammu to defend the rapists & murderers of little Asifa Bano. One was the Industries Minister & the other the Forest Minister. Indian media claims they resigned because Jammu & Kashmir Chief Minister Mehbooba Mufti “put her foot down, telling the BJP leadership that their continuation in the government had become untenable.” She should have mentioned that what made their presence untenable was protests in Kashmir & the international furor evoked by the monstrous character of this crime against a little girl because of her gender, ethnicity, religion, caste, & class.

This is a candlelight protest demanding justice for Asifa which was held in Srinagar in March. There will be another rally this coming Monday.