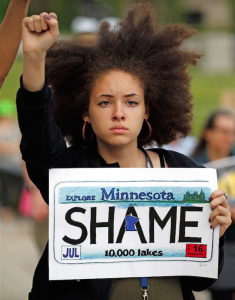 A young woman in St. Paul, Minnesota protesting the innocent verdict in the killing of Philando Castile by Jeronimo Yanez, the police officer who stopped him for a traffic stop.

There is nothing in the past of Yanez to foretell such a racist assault. He was raised in South St. Paul, a working class suburb known primarily for stockyards until they were closed in 2008. His father, Jesus, was a long-time tutor in the South St. Paul school district helping students learn English. Yanez, a Latino, had a degree in criminal justice, was highly trained, well-respected, & had been on the police force for about 4 years at the time of the incident last July.

South St. Paul is over 85% white with a Latino population of 12% & a Black population of about 4%. He lives in the suburb of Vadnais Heights which has the same percentage of white & Black residents & even fewer Latinos. No surprise, he worked for the police department in St. Anthony, a suburb with the same ethnic composition. It’s likely Yanez was afraid of Blacks & had relatively little contact with them outside of law enforcement situations. This would be a classic “driving while Black” incident.

He was tried in Ramsey County District court & prosecuted by the county attorney. It would be interesting to check out the composition of the jury who acquitted him on manslaughter charges. That means killing someone in circumstances not amounting to murder with malice aforethought. The video live streamed by Castile’s girlfriend Diamond Reynolds who was present in the car during the shooting has Yanez dead to rights for manslaughter. He was even found not guilty on two charges of reckless discharge of a firearm. It would be very interesting, probably damning, to read how the prosecutor handled the case, from the selection of jurors to the presentation of evidence & arguments.

Our fullest solidarity with protesters in St. Paul.