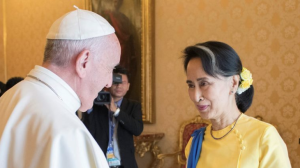 On Monday, Pope Francis will be landing in Burma for a state visit at the invitation of Suu Kyi & the generals. Last May, despite several years of genocide against the Rohingya people, the Vatican established full diplomatic relations with Burma which involves setting up a Burmese embassy at the Vatican & a papal nuncio (equivalent of an ambassador) in Burma. What doesn’t the Vatican get about rendering legitimacy to a fascist military state? Why would it choose to establish diplomatic relations whilst the military is engaged in genocide? Why would the Pope agree to make a state visit to Burma in the very midst of a genocide?

Charles Maung Bo, who Pope Francis appointed Burmese Cardinal in 2015, has asked the Pope not to refer to the Rohingya people by their proper name but to use euphemisms. If the cardinal who openly supports the Rohingya genocide had his way, Pope Francis would speak in spiritual abstractions about love for humanity & zip any protests about the genocide. It would be truly courageous if Pope Francis openly denounced the genocide & stood with the Rohingya but no one should hold their breath. Pope Francis doesn’t have an inspiring history when it comes to standing with the oppressed. On a 2014 visit to Israel at the invitation of Israeli president Shimon Peres, he visited the West Bank & said a few prayers at the apartheid wall but then paid tribute at the grave of Zionist founder Theodor Herzl & almost canoodled with Peres, including later welcoming Peres at the Vatican.

Our hope for the Rohingya is that Pope Francis will show political & spiritual leadership & not become a willing pawn of the Burmese military. Just so he knows, talking in euphemisms don’t cut it when it comes to justice. Suu Kyi has already pioneered that territory & look where it got her.

(Photo from May 2017 from Osservatore Romano via Reuters)