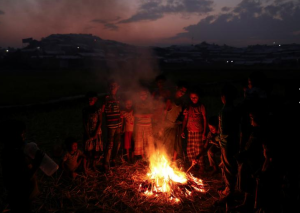 Pope Francis thinks his trip to Burma was a diplomatic tour de force. Suu Kyi & the Burmese generals could not agree more. Those who don’t mistake cowardice for diplomacy think his visit legitimized a fascist military regime & colluded to deny genocide. There will be those parsing his kind of diplomacy to prove it moved democracy forward in Burma, as he claims. They will claim his patronizing gesture toward a small delegation of Rohingya refugees in Dhaka showed his love for suffering humanity. How about calling it what it is? Stinking mendacity & collaboration with the Burmese military at the expense of the Rohingya people. Belated mea culpas don’t cut it. Not when you consider what his support for the Rohingya people could have done to build solidarity.

Photo is little Rohingya kids around a bonfire in a refugee camp in Cox’s Bazar.