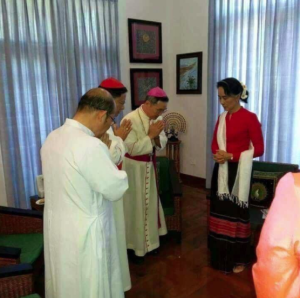 Pope Francis has accepted Burma’s invitation to make an official state visit from November 27th to 30th. He is scheduled to meet with Suu Kyi, the president & other government officials, the Buddhist supreme council, Cardinal Charles Maung Bo & the other Catholic bishops.

Judging from this photo of Catholic bishops bowing to Suu Kyi, Pope Francis has his work cut out for him. Some viewing this photo mistakenly thought curtsying to political power was part of Roman Catholic liturgy but in fact servility is a practice rooted in feudalism, not in Catholic theology. Apparently the Burmese Catholic prelates have resumed the servile stance to better serve the fascist military junta which rules Burma.

Pope Francis will be walking into a mine field on his visit since he has more than once spoken in support of the Rohingya people against persecution. The question is, what advantage did Suu Kyi & the generals hope to gain by inviting the pope to Burma? Have they hopes he will become as compromised with genocide as Cardinal Charles Maung Bo who asked Pope Francis not to use the name Rohingya when he speaks to the Burmese genocidaires? Will the pope then agree to speak in ambiguities, referring to Muslim suffering rather than Rohingya genocide? Or will he soften condemnation like the Dalai Lama who called the genocide “sort of harassing some Muslims”?

It isn’t certain what Pope Francis hopes to gain either for the Catholic Church or for Rohingya solidarity by making an official visit to Burma while the government is conducting genocide. The truth is, it’s a serious political blunder for him to make this visit because it renders legitimacy to the Burmese government & the fiction of a civilian government headed by Suu Kyi. He will be moving on to Bangladesh after his visit to Burma. If he compromises himself when addressing the genocidaires of Burma, any gestures he makes toward the Rohingya refugees can only be considered pathetic grandstanding. When one bows before genocide, not even the pope can stand up, dust off his knees, & speak with apostolic authority again.