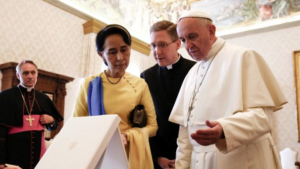 Pope Francis is scheduled to visit Burma & Bangladesh between November 26th & December 2nd. In Burma, he is scheduled to meet with Suu Kyi & the generals & later address politicians, diplomats, military leaders, & the highest Buddhist authorities in Burma, who all support the Rohingya genocide. Now the question is, what will he be talking about?

Last May, just a few months after the several month genocidal offensive against the Rohingya in 2016-2017, Suu Kyi met with the Pope in the Vatican to discuss establishing full diplomatic relations between the Vatican & Burma. Maybe Pope Francis is naive about politics & hopes to persuade Suu Kyi & the generals that genocide is contrary to religious teachings in all religions. But naiveté is unlikely since the Vatican has the resources to get the Pope up to speed on what is going on in world politics & how it’s folly, if not idiocy, to think you can talk fascist genocidaires out of genocide. Pope Francis should realize that he compromises the Vatican & the Catholic Church by publicly meeting with Suu Kyi & the generals whilst they are conducting a genocide that has caused 582,000 Rohingya to flee for their lives because their villages are being torched & thousands murdered, raped, tortured.

Does Pope Francis fear that if he doesn’t compromise with Suu Kyi & the generals the estimated 450,000 Catholics in Burma will suffer consequences? As a religious leader, he ought more to fear the moral, spiritual, & political corruption he will generate among those Catholics by compromising with fascism & genocide & appearing to legitimize monstrous human rights crimes. He ought to stop mollifying the fascist junta & make vigorous calls for the Catholic Church in Burma to actively oppose the Rohingya genocide. The Pope should not be held to a lower standard of human rights than we hold ordinary Catholics who should be horrified by his compromises.

He could begin by rebuffing all diplomacies with Suu Kyi & the generals & by summoning Cardinal Charles Maung Bo & the other Burmese bishops to the Vatican for censure & threats of excommunication if they don’t stop supporting the genocide. This is a video of the speech the Cardinal gave to that October 10th interfaith rally where he is ardently cheering on Suu Kyi & the generals. It shows him not to an unwilling participant in this rally but an enthusiastic, bloodthirsty adherent of the military junta, Suu Kyi, & the Rohingya genocide.