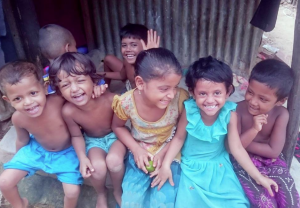 There is a repugnant & dangerous genre of photojournalism emerging which portrays Rohingya refugees as pitiful–not unlike that same genre of starving African children. It’s a pernicious form of propaganda meant to evoke pity, even contempt, & a sense of inevitability rather than outrage & a sense of affinity with the oppressed. That’s why it’s so important that Rohingya activists speak for themselves & their children. They don’t do that pity crap but talk about the humanity, the potential & the demands for justice.

It isn’t that photojournalism should not address the squalor & predations of refugee life but it should do so without depriving them of dignity or feeding into a pathos that looks down on the dispossessed.

As Imran said: “Above all I am a human being….This world is a home for us & we are all members of same family.”