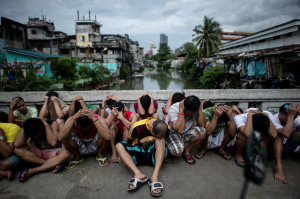 In the surreal & simple-minded world that libertarians invent, there are no conflicts between classes, only conspiracies & orchestrations. So when millions of people enter history on their own behalf, like in the Arab uprisings, it’s all CIA & Mossad performance politics.

Philippines president Rodrigo Duterte has become the poster child for their favorite tableaux: US regime change. Libertarians insist media reports about Duterte’s mass murder spree gunning down suspected drug users & street peddlers are orchestrated by the US to demonize Duterte. They claim the video where he compares himself favorably to Hitler is staged. All the demonization is a prelude to a US regime change operation against Duterte. Obama called Duterte a “colorful character.” Is that demonization?

There is no objective reality to them, only fictitious representations, because at the heart of libertarianism is profound misanthropy & contempt for working people. But this is not a tableau in Manila. These are suspects in an anti-drug operation carried out in a slum. What’s the evidence for drug crimes? None is needed. Who cares if Duterte is shooting down poor people? There’s too many of them anyway & they cause crime. If libertarians feign concern for victims of violence, it is only to make a stronger case for their US regime change scenario.

The real story–not the fictitious scenario–is that under neoliberal economic policies in Manila, public lands where dispossessed people build lean-to shacks for shelter & community are being privatized to build sweatshop facilities, resorts & golf courses, upscale shopping malls & condos. For years, slum residents have fought hundreds of pitched battles with bulldozers & riot police to keep from being evicted & made homeless. Authorities have employed arson over & over again to burn slums down & avoid that resistance. Now the so called war on drugs is being used as part of slum clearance.

There needs to be regime change in the Philippines–of the kind led by working people on their own behalf to end the tyranny of class inequality & violence. Libertarians think that’s all fairy tale stuff, that the world is run solely by the elite & their secret police & that working people have no role to play except as extras. They have no concept that “an injury to one is an injury to all.” That’s why libertarianism ends up at the extremes shading into racism, nationalism, xenophobia, paranoia, the wrong side of history.

We stand with the working people of the Philippines who fight so tenaciously for housing, against militarism, for human rights. We stand with the drug users & the alleged drug peddlers. No one, even Duterte, is above the law & everyone deserves their day in court.

This group are slum residents being detained in the operation.